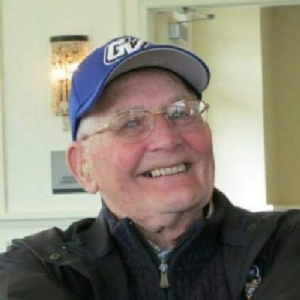 In our cortinued effort to record our Post history as well as some of our members, this page is about Post member Charlie Hoffman who passed away August 26th 2016.

Charlie was a WWII Navy Veteran (Gunner's Mate) who served on the USS Garfield Thomas which was a destroyer escort and was specifically designed with shallow hulls in order to hopefully avoid German torpedoes.

Charlie and William served together on the USS Garfield Thomas and they became good friends.  William was from Ann Arbor and graduated from Ann Arbor High School.  Charlie hailed from Brooklyn, New York.

During some rough weather William was washed overboard and was lost at sea.  After they returned to harbor Charlie was asked to deliver William's personal belongs to his family in Ann Arbor.  Charlie also collected $250.00 from the ship's crew to set up a memorial.  Williams mother did not want a memorial, not one she could see, as Charlie recalls.

To read how Charlie came to live in Ann Arbor and how the MVP Trophy got its name, click here to read the full article on Mlive.  Its a great story.