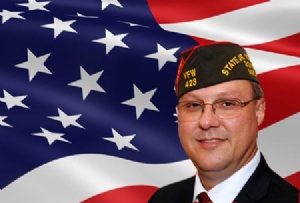 I entered the US Army in July of 1984 as an armor crewman. Was stationed at Fort Polk, LA before being assigned to Charlie Company, 1st Battalion, 72nd Armored Regiment , 2nd Infantry Div,  Camp Casey, Korea where I earned my eligibility for the Veterans of Foreign Wars. Upon completion of my enlistment in 1988, I joined the Michigan Army National Guard. I attended Central Michigan University where I joined ROTC and earned a commission as a Second Lieutenant of Armor in the Michigan National Guard. I was assigned to Charlie Company, 1st Battalion, 246th Armored Regiment where I served as a Tank Platoon Leader, ultimately becoming the Company Executive Officer before leaving the military. I joined C. Robert Arvin VFW Post 2408 in March of 2003 and in traditional VFW custom was nominated as post jr. vice commander at my first meeting and subsequently elected the following month. Moving through the chairs, I was nominated and elected post commander in 2004 and lead the post to achieve All State in 2005-2006. In 2007 I transferred to the Graf-O'hara Post 423 in Ann Arbor. In 2006 I was elected as 6th district jr. vice commander. Moving though the chairs, I became the 6th district commander for 2008-2009 where I lead the district to become an All State and All American district. In 2009 I was elected as the 6th district quartermaster and served in that position until 2014. I was appointed as the department Buddy Poppy director for 2007-2008 and was appointed as the MOV Editor and Historian in 2009 and served as editor until 2015.  I was elected as the Big Ten Delegate for 2012-2013, and was appointed as the national aid de camp in 2012-2013 and 2013-2014. I have been married to the love of my life, Ivette, for 8 years. Between us, we have 3 sons ages 22, 17, and 13. I have been employed at Liebherr Gear Technology as the spare parts manager for 20 years.