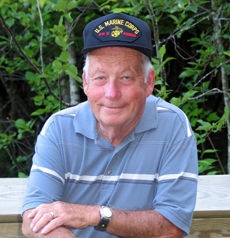 hington Fletcher Jr., age 92, of Ann Arbor, Michigan passed away on Monday April 22, 2019. George was born August 19, 1926 the son of George and Cora Fletcher (nee Stoll) in Ann Arbor, Michigan. George had one brother, Owen Robert Fletcher, who preceded him in death in 1992. He was a devoted and selfless husband and father. He is survived by his wife JoAnn; his children Geralyn (John) Doskoch of Charlevoix, Karen (Marty) Lutz of Ann Arbor, Michael (Teresa) Fletcher of Chicago; and his beloved grandchildren, Jacob and Julia Doskoch; Kelsey, Jamie and Owen Lutz; and Noah and Isaac Fletcher. George grew up on South Boulevard and attended Ann Arbor High. After his graduation in 1944, he enlisted in the United States Marine Corps where he served as a rifleman in Japan in WWII. On October 19, 1957, he married the love of his life JoAnn Beusterien and soon after built a house on Anderson Avenue, two blocks from his childhood home. There they raised three children and were founding members of St. Francis of Assisi Catholic Church. He was active in the church as a Eucharistic minister and a member of the Knights of Columbus. George worked as a typesetter for The University of Michigan Printing Services until his retirement in 1986. Afterward, he remained active as a volunteer with the Red Cross and Meals on Wheels, travelled with JoAnn, and enjoyed being a part of his grandchildren’s lives. As a youth, George was actively involved in sports, playing football, baseball, and golf at Ann Arbor High School. As an adult, he was a coach and referee for a variety of local youth sports programs including baseball, football and basketball. He was also a big fan of University of Michigan sports; he worked at both the football and basketball stadiums and was a goal judge at Yost Ice Arena for over 20 years. In 2006, he was honored on the field at the University of Michigan football stadium ("The Big House”) for 65 years of service. George was an avid outdoorsman and gardener. He kept a large and varied vegetable garden every year and his tomatoes were enjoyed by the entire neighborhood. His favorite place was "up north” at his lakeside cabin in Michigan’s Upper Peninsula, where he enjoyed fishing, walking in the woods, picking berries, and "puttering”. His final two years were spent at University Living, where he developed a special bond with his caregivers, keeping them laughing with his quick wit and gentle spirit. George’s family is truly grateful for the compassionate care he received at University Living and from the staff at Great Lakes Hospice.