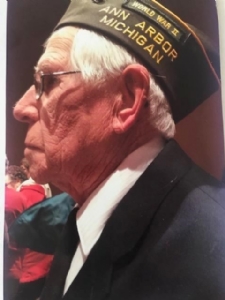 Paul Scheffler, of Ann Arbor, Michigan passed away peacefully at home on Friday May 31, 2019, at the age of 98. Paul (one of 13 siblings) was born August 8, 1920 to the late Mae and Paul Scheffler. Paul is survived by his; beloved daughters Deb (Steve) Spencer and Linda (Timothy) McCarthy; dearest grandchildren Josie McCarthy, James (Jesse) Spencer, Mark (Angela) Spencer, Michelle Spencer; sweet great grandchildren Sean, Addison and Jordyn Sieg, Skyler Spencer and his special nephew and his wife Fred and Darlene Scheffler.

Paul was preceded in death by his cherished wife Shirley Ann Crippin, with whom he spent 66 wonderful years of marriage. Paul was also preceded in death by his dear granddaughter Makayla Sieg. Paul was a lifelong Ann Arborite. During his lifetime, he worked many different jobs. He retired after 35 years in 1981, from the City of Ann Arbor as a foreman for the street department in charge of snow removal and street repair.

Paul was a veteran of the United States Marine Corp and proudly served his country in World War II. Serving in the Pacific, Paul participated in action against the enemy in Kwajalein, Guam, and Iwo Jima. Paul was an amphibian tank driver and was one of the first tanks on the beach at Iwo Jima and served his country from 1943 to 1945. In recognition of his service to our nation, we owe him and his family a debt of gratitude.

Paul was proud to be an active member of the Graf O’hara VFW Post 423 until his death. In 1930, he married the love of his life, Shirley, and they were blessed with two beautiful daughters. Paul was a loving and dutiful father, always ensuring his family was cared for and loved. Paul greatest joy in life was being with his family and friends. Paul loved the outdoors which is reflected in his love of camping and gardening. Paul was a friend to all animals. Although he started late in life, he was passionate about golf especially when playing with his two sons-in-law. He also enjoyed creating woodworking projects and giving them to family and friends.

In lieu of flowers, donations can be made to the Graf O’Hara VFW Post 423 for their scholarship fund to send children of Veterans’ to Camp Trotter or Arbor Hospice