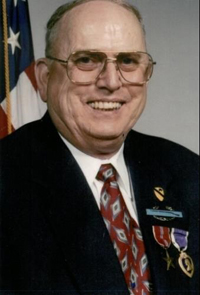 Swisher, Rueben V. 1/3/1933 - 6/1/2020 Ann Arbor, Michigan Reuben "Billy" V. Swisher, age 87, resident of Ann Arbor, Michigan since 1952, passed away on Monday, June 1, 2020. Billy was born a "Yooper" on January 3, 1933 in Mueller Township in the Upper Peninsula of Michigan. He was the son of Ovid Sr. and Jennie (Archery) Swisher of Germfask, Michigan. He graduated from Germfask Grade School, attended Manistique High School and obtained his high school diploma from the United States Air Force. He served in the U.S. Army Rank of CPL-E4 during the Korean War and the U.S. Air Force Rank of TS6T-E6 during the Vietnam War. Billy served over nine years on active duty and five additional years in the Reserves. Reuben left Manistique High School in 1950 to enlist in the U.S. Army. Reuben was only 17 years old when he served in combat in Korea and was assigned to Fox Company of the 2nd Battalion, 7th Regiment, 1st Cavalry Division. He was wounded twice while in Korea defending Wonju Line close to the twin tunnels of Koksu-Ni, named the "Killer Operation." He was awarded the Bronze Star for heroism. His unit was attacking entrenched enemy forces when it was hit by heavy machine gun fire and was forced to withdraw. Despite the heavy fire, he remained in position and covered his comrades' withdrawal with his fire. He held off the heavy enemy counterattack until his platoon found new positions and reorganized to continue their attack the following day. Despite his frostbitten feet, he followed the enemy off the hill later that night. Besides his Purple Heart and Bronze Star, he earned the Combat Infantry Badge and numerous other metals. He met his future wife, Kyoko Ejima, in Sesebo, Japan in 1951 while he was there with the U.S. Army. Reuben returned to the United States and was discharged from the Army. He corresponded with Kyoko for four years. He returned to Japan as a civilian in 1956 and married his beautiful lost love at the American Consulate in Yokohama, Japan. Reuben served the Department of Veterans Affairs and earned several honors while employed there and served over 800 hours of volunteer work at the VA Medical Center and obtained the position of GS-9. He retired there in 1992 and was nominated Detroit Executive Board Federal Employee of the Year 1982, 1983, and 1986 and semifinalist for Outstanding Handicapped Federal Employee of the Year in 1984. Reuben was Disabled Veteran of the Year for the State of Michigan in 1984. He was honored by the VA as one of the first Wall of Heroes in 1998. He participated in Veteran History Project and videotaped for the National Archives Library of Congress in Washington D.C. to preserve memories from the Korean War from 1950 through 1953. A copy of the videotape is located at the Ypsilanti Public Library in Ypsilanti, Michigan. He was very active in Washtenaw County Veterans Organizations for over 50 years which included work as: Trustee for Michigan Veterans Trust Fund of Washtenaw County, Commissioner of Veteran Affairs Committee, Washtenaw County, Commander of Disabled American Veterans of Washtenaw County, Commander of Military Order of the Purple Heart of Washtenaw County, Aid to the National Commander, D.A.V., Commander of Washtenaw County Council of Veterans, and Veteran of the Year State of Michigan, D.A.V. Reuben was a Life Member of Washtenaw County D.A.V. #13, GRAF-O-Hara VFW Post #425, Erwin Prieskorn Post #46, John Terhune MOPH Post #459 and USAF Sergeants Association #39901, and was a past commander of the Washtenaw County Council of Veterans and served as their Chaplin for 27 years. He also served as commander of DAV #13 for seven years. He held most of his elected and appointed offices in the DAV at the chapter level, department level, and national level. Throughout his life, he and wife, Kyoko, enjoyed traveling, Europe, Asia, Canada, Mexico, and each of the 50 States. Enjoyed taking pictures, friends and family. He was respected and admired by everyone that knew him. Will be sadly missed by all, especially his wife, Kyoko, of 64 years. He was preceded in death by his father, Ovid Swisher Sr.; his mother, Jennie Swisher; his brothers, George Swisher, Ovid Swisher, Jr., Edward Swisher, Andrew Swisher; and his sister, Helen Swisher. Reuben is survived by his wife, Kyoko Ejima Swisher; his brothers, Larry (Sandra) Swisher; his sisters, Jennie Latsch and Barbara Mannlein; and many nieces, nephews, and cousins. Memorial service will take place at Nie Family Funeral Home, 3767 W. Liberty Road, Ann Arbor, 48103, on Tuesday, June 9th, at 11 am. Friends and family are welcome to gather at 10 am. Burial of cremated remains will be held at Forest Hill Cemetery in Ann Arbor, Michigan. Memorial contributions can be made to Washtenaw County Veterans Honor Guard.