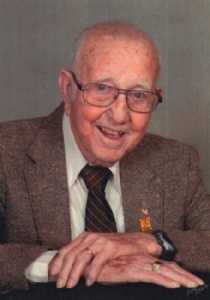 Born October 26, 1922 in Isabella County, MI. Son of Floyd and Mildred (Randall) Burgess. He graduated from Farwell High school in 1940. He attended Central Michigan College, where he met Betty John, his future wife. Once Pearl Harbor was attacked he enlisted in the Army Corps and always felt he was "just doing his job." He graduated from pilot training and was commissioned 2nd Lt. on October 1, 1943. He flew a P-38 in the 432nd Squadron of the famed 475th fighter group from 1943-1945 in the Southwest Pacific Ocean. He had 131 combat missions and flew 452 combat hours.

Once he retired from the State of Michigan, he started volunteering for the Red Cross. For over 37 years, 1-2 times per week, he drove into downtown Detroit and picked up boxes of blood and blood products, brought them back to Ann Arbor area and delivered them to the 6 area hospitals.